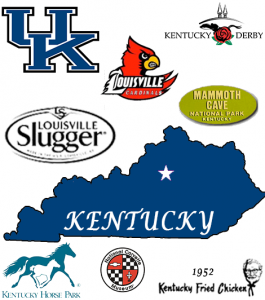 Kentucky, one of the so-called border states of the S central United States. It is bordered by West Virginia and Virginia (E); Tennessee (S); the Mississippi R., across which lies Missouri (SW); and Illinois, Indiana, and Ohio, all across the Ohio R. (W, N).

Kentucky’s climate is generally mild, with few extremes of heat and cold. Frankfort is the capital, Louisville and Lexington the largest cities. Little remains of Kentucky’s great forests that once spread over three quarters of the state and were renowned for their size and density. Tourist attractions include the famous Kentucky Derby at Churchill Downs in Louisville and the celebrated horse farms surrounding Lexington in the heart of the bluegrass region. The Abraham Lincoln Birthplace National Historic Site and Cumberland Gap National Historic Park are historic landmarks. At Fort Knox is the U.S. Depository.

Kentucky is noted for the distilling of Bourbon whiskey and for the breeding of thoroughbred racehorses. Tobacco, in which Kentucky is second only to North Carolina among U.S. producers, has long been the state’s chief crop, and it is also its chief farm product, followed by horses and mules, cattle, and corn. Dairy goods, hay, and soybeans are also important.

Kentucky derives the greatest share of its income, however, from industry. Even Lexington, one of the world’s largest loose-leaf tobacco markets, is industrialized. The state’s chief manufactures include electrical equipment, food products, automobiles, nonelectrical machinery, chemicals, and apparel. Printing and publishing as well as tourism have become important industries. Kentucky is also one of the major U.S. producers of coal, the state’s most valuable mineral; stone, petroleum, and natural gas are also extracted.